Summer School: Congrats To The CNA's!

Last summer NTI started offering a CNA program.  GG and her friend P both plan to work in the health field after college.  So this summer they both voluntarily enrolled in the program, and they both did great. 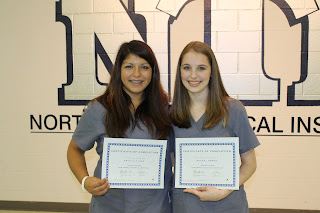 Since P was riding with GG and I, and they had to get up super early on the mornings they did have clinicals, she spent some nights at our house.  Want to know what you get when you throw one more teenage girl into a really small house that already contains two teenage girls?  Giggling chaos complete with slightly off key Full House rerun serenades every thirty minutes.

The first night before clinicals everyone was required to get their blood pressure and pulse taken before they could eat supper.  My mother knew this was going to be a requirement before she came to my house for supper, but she came anyway.  Yep, she's a brave brave woman.  I was allowed an exemption from this practice session because I was cooking supper.  They also practiced moving one another from the kitchen chair wheelchair to the couch bed using their trusty gait belts until I made them return the wheelchair to the kitchen and set the table.  They wanted to shave L, and in an effort to be supportive he agreed.  However, I had my reservations about that idea and distracted them with ice cream.

They also learned other valuable life lessons.  P learned that we don't iron pants while they're still on the hanger.  GG learned that dawn dish soap will remove lotion from scrubs even after they've been washed and dried.  GG learned she really can take a complete shower on an 8 minute timer (because nobody wanted to see me morph into mean mommy...again).  P learned the difference between regular and petite sizes (she also learned how to roll her pants up like Webster until we could get them hemmed).

And they both learned that reading books can never quite prepare you for the real thing.  After picking them up from the first day of clinicals we had the following conversation:

P: I thought there would be less poop.

Me: Yea, I thought the same thing about motherhood.
Posted by Unknown at 8:47 PM No comments: