Am I the only one that can't stand those little red notifications that pop up on the corner of iPhone apps?  I will do everything in my power to get rid of them.

Ever since the newest Apple ios 6 software update was released I've had one of those red notifications on the corner of my settings app, and ever since that little red dot popped up I've been trying to make it go away.  I simple can NOT get the new software to load. 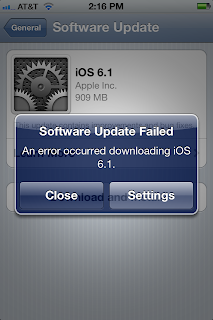 This week I decided to just bite the bullet.  In a last ditch effort to complete this task I performed an iCloud backup and reset my phone to factory settings hoping it would automatically update to the latest version of software.

NOPE!  Not only did it not work but when I tried to restore Coco, my temperamental frienemy, to her previous glory I couldn't get that to work either.  The last backup available to me for a successful restore was from August of 2011.   Coco didn't come to live with me until December of 2011, but being the desperate iPhone addict that I was am I clicked the restore button anyway and hoped for the best.

Bless poor Coco's heart, she doesn't even know who she is anymore.  In my desperate attempt to upgrade her software to ios 6.0 I've downgraded her entire content to a 3GS.  It's like a smart phone version of Freaky Friday.

To add insult to injury my music was wiped clean and I didn't have time to restore those files from iTunes immediately.  Since I cannot workout without some kind of music I reinstalled the Pandora app and seeded what I thought would be an upbeat station.  I was exactly wrong, but I spent the biggest portion of a 45 minute workout running to rap music.  I am not a fan.  However, I did learn some new vocabulary.  I can't think of a single ladylike, southern, polite, or appropriate setting  in which I might could or should use my newly acquired words; but if I ever find myself on the wrong side of a town, track, shipping dock, or some other Popeye meets Hells Angels vision inducing place and need to defend myself in a round of sudden-death curse word smack down...I think I might have a fighting chance.

My new plan is to take Coco to the nearest Starbucks, order a skinny latte IV drip, and set up a recovery station where I will either resolve the problem and restore her to her former splendor, or she will eventually implode.  If you happen to be in Starbucks and see a frustrated, strung out on low fat lattes woman sitting in the corner talking to a smart phone in the middle of an identity crisis stop on by and say hi!
Posted by Unknown at 11:29 AM