I currently have a total of four cats living at my house and at least one mouse living in it.  GG found the evidence in the towel drawer last week.  This led to the following conversation with L:

Me: Explain to me how we can have two cats that will search the field next to our house for a mouse or rat trophy to bring to the back porch and I have a mouse making itself at home in my kitchen.  What are they CIA?
L: Yep, obviously they're field agents!
Me: So I guess I need Homeland Security?!?!

Smudge (the exterminating machine) wasn't much help the last time I needed a hero close to home, Lacey (the old lady) is just too fat, and Trixie (the foolish kitten) is much too...well foolish.  That left Kathy (named after Kathy Lee Gifford because that cat never shuts up) to save the day, and she just wasn't getting the job done.  So I decided to intervene.

I read an article one time that said mice are unable to pass gas and since chocolate can cause intestinal gas it could be deadly to mice.  With this in mind I left some chocolate in the drawer with the towels.  Apparently the mouse didn't read that article.  It ate half the chocolate the first night and expressed it's appreciation by leaving several mousy turds on my clean kitchen towels.  It returned the second night to eat the remaining chocolate and once again leave behind it's heart felt thanks for the snack. 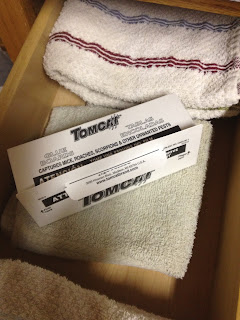 Yesterday I sent L to town for supplies.  Last night, armed with two peanuts a marshmallow and a Tomcat Glue Board, I declared war on the rodent population trying to take up residence in my kitchen.  Today when I checked the drawer there was nothing, not even a mousy turd on a towel.  I have to say this really disappointed me.  Not only did my well baited and strategically placed glue trap fail to catch my mouse, it didn't even scare the crap out of it!