At GG's last orthodontist appointment she was told that if she wore her rubber bands at least 21 hours a day for the next six weeks there was an excellent chance they would remove her braces at her next appointment.  She not only wore them the required 21 hours per day but I'm pretty certain she mastered the art of eating with them in and only removed them to brush her teeth.

Today was appointment day!  At 11:00 this morning we arrived to hear the verdict.  I'm not sure who was more nervous, her because she really wanted them removed or me because I wasn't sure what it was going to take to console her if they didn't remove them.  I was pretty certain that a cookie wasn't going to cover it.

In anticipation of good news we took a "before " picture... 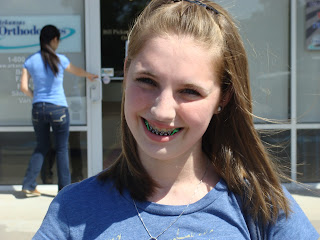 and with great joy (and relief) we took an "after" picture. 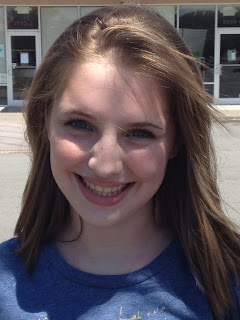 As we were leaving she was handed a treat bag of all the goodies she wasn't suppose to eat while she had braces.  Oops.  Seriously?!?!  Who goes 20 months without popcorn?!?! 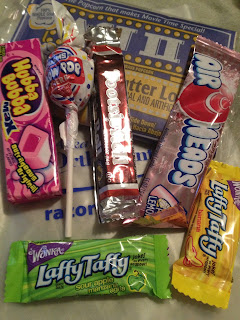 ﻿
Since a consolatory treat wasn't necessary we went for a celebratory lunch instead.  In two weeks we'll go back for the retainers.  As we're leaving the orthodontist office GG and I had the following conversation.

GG: I've ordered my retainers in black and hot pink.

Me: What? (I must admit I did not realize colors were an option)

GG: Black and hot pink!  What do you think?

Me: Well they sound like they'll be feminine and slimming. (??)
Posted by Unknown at 7:58 PM