but I promise I'm going to do better.

The last couple of months have been busy.  We've been making the middle count, I've just not been accounting for it.  So I'm going to finish writing the blogs for our excursions and solemnly promise to do better in the future.

Last month we went to see an opera.  Just in case you're wondering the same question L's sister LE asked, the answer is yes we went on purpose.  We went to see A Little Night Music at Opera in the Ozarks in Eureka Springs.  I deliberately chose this opera because it was in English and it was adapted to a film starring Elizabeth Taylor in 1977.  Just so you know...this particular opera (and film) is, for lack of a better word, raunchy.  When I decided to take the Girls to an opera I did it because I wanted them to have some exposure.  However, that wasn't really the kind of exposure I had in mind.  All that aside we still had a great time, even L admitted that he wouldn't mind going to see another one sometime.  Maybe next time I can pick something that doesn't require so many parental explanations on my part. 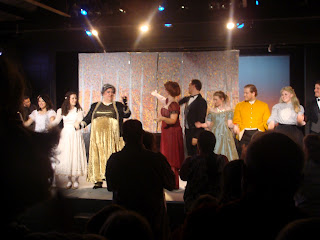 Just an FYI: the woman's character in the black and gold dress was played by a man, and he did a fantastic job.
Posted by Unknown at 5:34 PM