I Just Know I'll Win It This Time

You might remember a few years ago I was up for Mother of the Year only to lose at the last minute due to the "Great Bouncy Ball Fight of 2008".  Well I'm still after that trophy!

Last December I took NG to an ENT doctor for nosebleeds.  He performed a silver nitrate cauterization, and for the last six months it hasn't been a problem.  Then they came back with a vengeance.

Three weeks ago I had to take her to ER because we couldn't get the bleeding under control.  The triage nurse stuck a clip on her nose and told us to have a seat.  Four hours and $125 later I realized we didn't need a doctor, what we needed was a clothes pin. 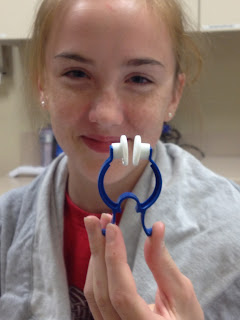 The next day we were back in the ENT doctor's office where he performed another silver nitrate cauterization.  He then told us if this didn't work he would want to perform an electrocautery and due to her age recommended doing it under anesthesia.

It didn't work and the next week we were back in his office to set a surgery date.  Furthermore, we needed it done ASAP because she would be leaving for camp on July 29.  He scheduled her for July 27 and assured us camp would be no problem.

Friday morning NG had her minor procedure with a side of major anesthesia, and was home by that afternoon to recover. 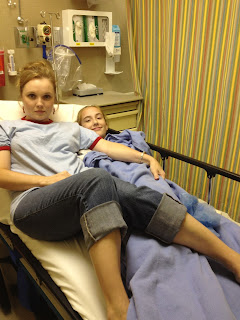 Her nose was basically painfree but she did have a lingering headache from the anesthesia.  Sunday afternoon she decided she would still like to try going to camp, so L and I dropped them off, checked them in, and left with a promise to come get NG if she got worse or did not continue to improve.

Today the surgery center called to check on her and I had the following conversation:

Nurse: May I speak with the parent or guardian of NG?

Nurse: I was calling to see how she's doing.

Me: I guess she's doing fine.  I dropped her off at camp yesterday and I haven't heard from her so I assume she's fine.

Me: The doctor said it was fine for her to go, I spoke with him about it on Friday.

Nurse: So she's at camp now?

Me: Yes, and I checked for pictures this morning and she looked ok.

So do you think they'll mail the trophy or will there be a ceremony?
Posted by Unknown at 6:09 PM