Why We Do Trial Runs...Strawberries-N-Creme Punch

In preparation for J's shower I decided to make a batch of punch.  Since we already had a luncheon scheduled at work I decided my coworkers would be my guinea pigs.  I know what you're thinking, but trust me, they love it when I use them as taste testers.  Who do you think I fed the Crab Dip to?!

The recipe I had said the flavor of the punch could be altered by the flavor of the jell-o used.  I decided to try making a cherry limeade punch.  It didn't turn out as well as I had hoped.  The taste was acceptable but seemed to be missing something, and the color wasn't really attractive.  So I decided since the cake was going to be strawberry/ white, I would err on the side of caution and make a strawberries-n-creme punch.  It turned out perfectly.

The recipe below is for the strawberries-n-creme punch I made for the shower, but all of the pictures except the one above are from the original cherry limeade punch.  Remember the flavor/ color can be altered with the flavor/ color of jell-o you choose to use (but you might be disappointed).


Strawberries-N-Creme Punch
1 can frozen lemonade (pink lemonade may also be used)
2 boxes strawberry jell-o
2 cans pineapple juice
4 quarts water
2 bottles Ginger Ale
1 box French Vanilla ice cream
Boil water.  Add jell-o and dissolve.  Add lemonade and pineapple juice, simmer for one hour.  Chill completely.  When you're ready for punch to be served place half of ice cream in bottom of punch bowl, cover with one gallon of punch mixture and one bottle of Ginger Ale.  Stir well and serve immediately.  This recipe makes enough for two full punch bowls.
It doesn't really matter what kind of Ginger Ale you use.  I used Schweppes for this batch and Canada Dry for the batch I made at the actual shower, I couldn't tell any difference at all. 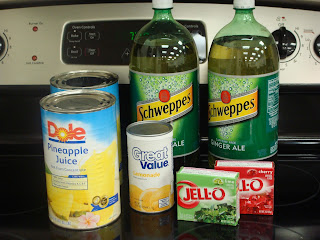 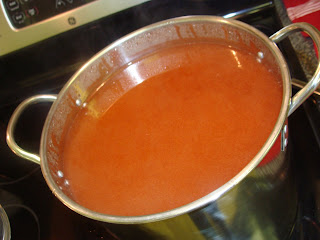 I had the brilliant idea to speed the chilling process by popping it into the freezer.  I don't recommend that unless you want to have to explain to your coworkers how you've melted all of the ice in the ice maker. 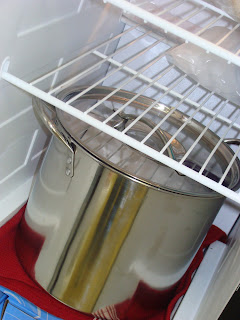 This is an accurate picture and it really was that color.  I'm sure two boxes of cherry or lime jell-o would have been fine, but I don't recommend mixing them. 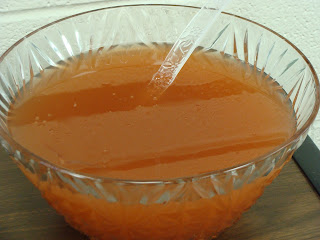