A Southern Story And Some Fried Chicken

Let me start by saying chickens were harmed (and eaten) in this story. 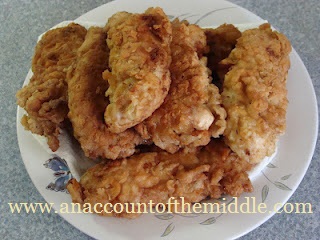 Remember me telling you that my grandparents raised chickens?  Well that meant that our chicken dinners originated from the yard, not the store.  I grew up watching this process but never participating.  Not because I refused or was bothered by it but because it was just one of those things that I was never asked to help with.

The first spring after L and I married he decided he wanted to raise chickens, not professionally but as a hobby.  So we ordered some baby chicks through the mail (yes, through the mail) and when they arrived he became the king of his chicken coop and I was his queen.

When we moved, two years later, we took our chicken kingdom with us.  By this time we had the chickens we had ordered through the mail, the chickens our chickens had hatch off, a few chickens my grandmother had given us, and a hen I bought at a yard sale on my lunch hour one day when I still worked at the bank.  And since it was summer time I had no choice but to take her inside and keep her under my desk for the rest of the day.  Of course she couldn't keep her chicken beak shut so everyone knew she was there.  But that's the thing about living in the south; when people hear a chicken clucking under your desk while they're cashing their paycheck they don't ask "why?", they ask "what kind?".

Amid our chicken society was the meanest rooster this side of the Mason Dixon.  He beat up on the other chickens, the cat, and the Girls if he could get to them.  That last offense is what signed his death warrant.  Unfortunately, we couldn't catch him.  L's solution to this problem?  A .22 bullet.  Yep, L shot a chicken.  That meant my job was to cook it.

This is when it occurred to me that even though I had seen chickens being prepared for cooking my entire life, I didn't actually know how to do that.  So I called my mother (who happened to be at my grandmothers house) to get instructions.  Since L had skinned it before bringing it to the house that just left the cleaning and cutting it up for me to do.

My mother's first instuctions were to remove the roosterly parts, located somewhere close to the kidneys.  While standing at my kitchen sink with a cordless phone shoved to my ear, elbow deep in bloody water, holding my rooster with his legs spread apart, I had the following conversation:

That last statement was met with a silence, a whispered response to my grandmother, and then peals of laughter through which my mother gasped out, "HE FIELD DRESSED A CHICKEN?!?!".

Apparently that procedure is for deer.  Chicken?  Not so much!  That is why our chicken comes from the store.  I'm secure in my southerness, I don't have anything to prove.


Fried Chicken Tenders
8 chicken breast tenders, thawed
1 cup flour
3 eggs, beaten
1 cup crisco
salt and pepper to taste
Melt crisco in skillet over medium/ high heat.  Place flour and beaten eggs in seperate bowls and set aside for dipping.  Place tenders on cutting board and sprinkle with salt and pepper.  Dip tenders in egg first, flour second, repeat this process once more and then place in melted crisco.  Cook chicken 20-25 minutes, turning every 5-7 minutes.  Chicken should be browned on all sides, juices should run clear, and the center should not be pink.
I use a cast iron skillet for anything I'm going to fry.  It isn't necessary to buy your cast iron skillet new, every one that I own I bought used and reseasoned.  (It is necessary that they be seasoned before you use them) 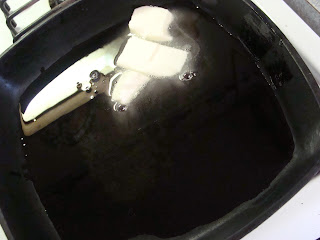 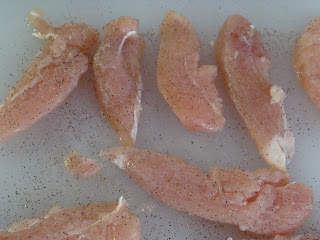 I used a fork while I was taking the pictures, but it's really easier to dip your tenders using your hands.  Just take extra care with washing your hands so as not to contaminate any other food you might come in contact with. 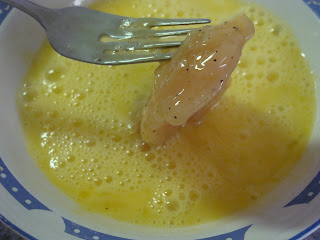 By the time you get to the last tenders your flour and egg mixture will be thicker.  That's ok, just as long as it sticks to the chicken you can use it.﻿ 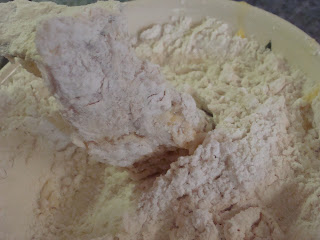 Keep a close watch on your crisco, it's ok to add more if needed. 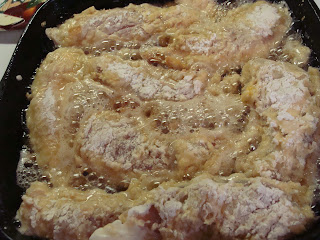 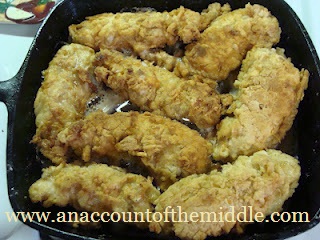