Here's another funny e-mail from the folder.  After all of our "bear excitement" yesterday I thought this was particularly entertaining.

Last week while I was home I happened to look out and see a wild turkey in our yard.  I immediately grabbed the camera and then called L to tell him.  We then had the following conversation:

When he got home and looked at the pictures he declared it to be a jake.  Yep, that's just what I was going to say! 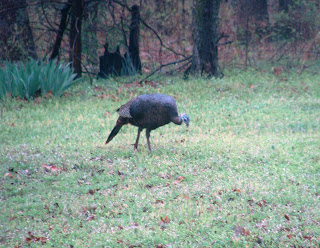 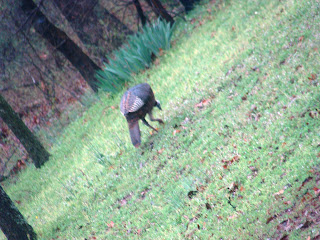 Bear Warning
California State Department of Fish and Game is advising hikers, hunters, fishermen, and golfers to take extra precautions and keep alert for bears while in the Yosemite and Mammoth areas.
They advise people to wear noise-producing devices such as little bells on their clothing to alert but not startle the bear unexpectedly.  They also advise carrying pepper spray in case of an encounter with a bear.
It is also a good idea to watch for fresh signs of bear activity and know the difference between black bear and grizzly bear droppings.  Black bear droppings are smaller and contain berries and possibly squirrel fur.  Grizzly bear droppings have little bells in them and smell like pepper spray.
﻿
Posted by Unknown at 9:08 PM