A few years ago L and I were watching Emeril Live and he was making Baby Back Ribs with Homemade Barbecue Sauce and Smashed Potato Salad.  We decided it looked good and we should give it a try.

The first time I made this recipe I followed it exactly, and it was great.  However, that was way more work than it needed to be, so I decided to yank out a little of the Martha and throw in a little Maxine.

First...grocery stores have barbecue sauce already made and in a bottle, use that.  Second...grocery stores also sell Emeril's Essence already premixed, use that.  If your grocery store doesn't sell Emeril's brand check out their selection of all purpose seasonings.  I personally prefer to use Head Country All Purpose Championship Seasoning.   This is also the same seasoning I use when I make Bacon Wrapped Pork Loin.  Third...ribs are ribs.  I have used this recipe with both pork and beef, and with both baby back and spare ribs.  They've all turned out wonderfully.  Fourth...the recipe calls for a dark brown ale and recommends using Abita Turbo Dog.  The last time I made this recipe I couldn't find Abita Turbo Dog Dark Ale so I tried Lilja's Hell Hound Brown Ale and it worked just fine.  So apparently any dark doggie beer will do. 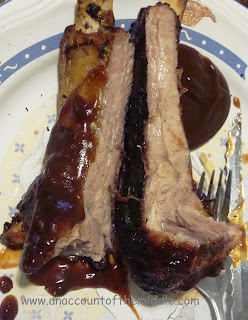 Grilled Barbecue Ribs
2 racks ribs (pork or beef), each cut in half
Emeril's Essence or All Purpose Seasoning
3 bottles dark brown ale
1 bottle barbecue sauce
Sprinkle ribs liberally with seasoning on both sides.  Place in large roasting pan and cover ribs with beer.  Cover roasting pan with aluminum foil and all to marinate in the refrigerator at least 8 hours or overnight.
Remove ribs from the beer and bring to room temperature.  Line a large deep baking pan with aluminum foil, lay the ribs on top, cover tightly with aluminum foil and bake at 325 degrees for 2 hours.  Transfer to hot grill, cover, and cook over indirect heat for 30 minutes.  Brush the ribs with barbecue sauce.  Baste and turn every 8 minutes, repeat this process twice.  Remove from grill and serve immediately.

I trim off any excess fat before I season and marinate the ribs. 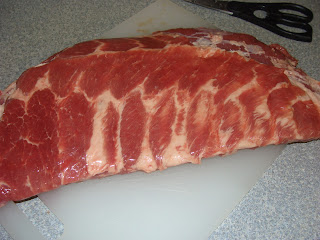 I'm pretty liberal with the seasoning because some of it will wash off with the beer. 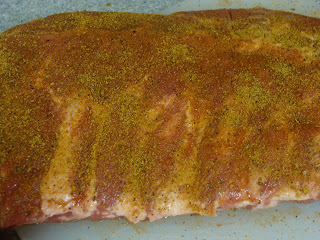 I use kitchen shears to cut the ribs. 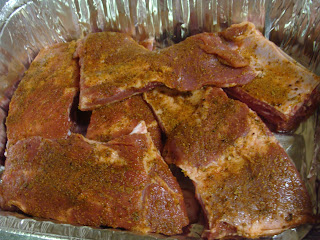 Try not to pour the beer directly on the meat since this will wash the seasoning off the meat. 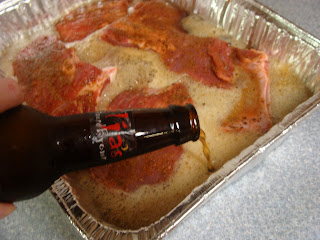 I use a deep metal baking pan for cooking the ribs in the oven. 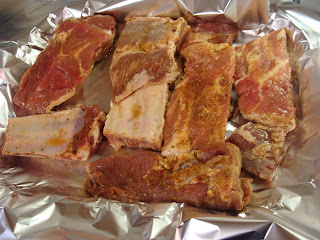 Ready for the grill. 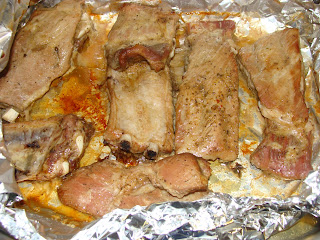 This part is L's job.  He does the grilling (I supervise). 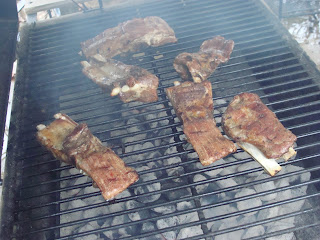 He does a great job too.  You'll want to keep a close eye on the ribs after you add the barbecue sauce. 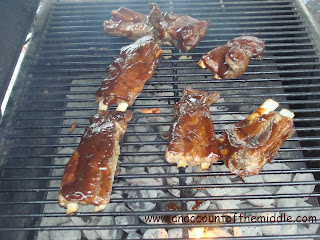 And since the oven was already hot I decided to make a pan of cornbread. 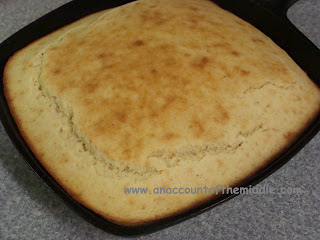 Mix all ingredients together and pour into a greased square pan (I use a greased cast iron skillet).  Bake at 425 degrees for 20 - 25 minutes.
Posted by Unknown at 7:18 AM