And Then I Changed My Mind: Tortilla Pinwheels

A few weeks ago, in preparation for J's upcoming baby shower, I did a trial run on a recipe I threw together for Pizza Pinwheels.  That post has been extremely popular, like the highest ranking post of my entire blog popular.  However...

Due to the fact that I already had three other recipes that would require cook time the morning of the baby shower I decided to replace the Pizza Pinwheels with tortilla pinwheels that would allow for preparation the day before and require no cook time the day of.  Since this was a last minute decision and there would be no time for a trial run, that meant I would have to choose my recipe carefully. 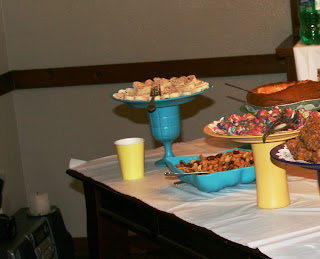 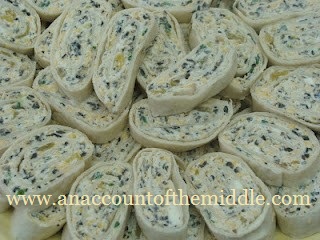 They turned out well, much to my relief!  The recipe is listed below, but here is a link to the website where I originally found it.  I will be retaining this recipe for the future.
Tortilla Pinwheels
Filling
1 cup sour cream
1 pkg cream cheese, softened
1 small can diced green chilies
1 small can chopped black olives
1 cup cheddar cheese, grated
1/2 cup green onions, chopped
1/2 tsp garlic powder
5 10 inch flour tortillas
Mix all filling ingredients together.  Divide filling evenly into 5 separate servings, and spread evenly over flour tortillas.  Roll up tortillas.  Tightly wrap each tortilla in plastic wrap, twist the ends to seal.  Refrigerate for several hours, or overnight if possible.  Unwrap and cup into slices, approximately 1/2" thick.

I used actual green onions for this recipe rather than the minced onion I usually use.
﻿ 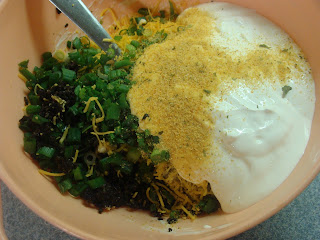 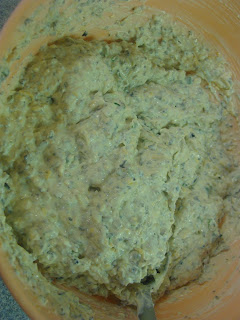 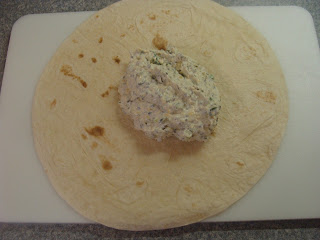 I left a little room at the edge for the filling to spread as the tortilla was being rolled up. 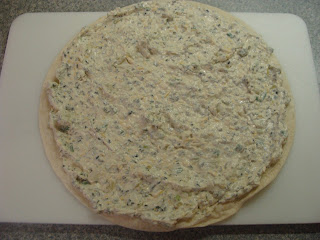 I rolled the tortillas firmly but tried not to mash them so as not to squeeze the filling out of the ends. 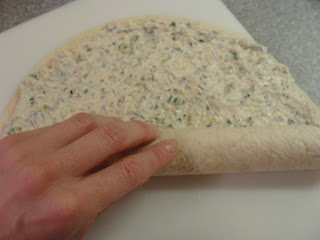 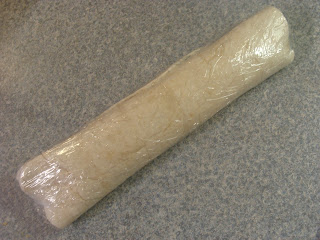