This Is Why You Should ALWAYS Have A Plan B

...because otherwise you might find yourself all dressed up with no where to go. 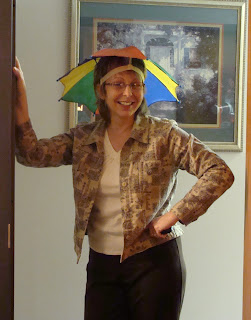 Yes, that is an umbrella on M's head, and yes I was extremely jealous.  First thing yesterday morning M showed up at my office door, sporting her frugal find, and declaring that should the chance of precipitation that was predicted actually occur she was prepared.

She, obviously, had planned ahead and would be able to remain dry while still having both hands free for digging and bidding.  I, on the other hand, would only be able to do two out of three of those things at one time because I did not have the foresight to invest in an umbrella I could strap to my head.  Just so you know, I am now on the hunt for predicted precipitation protective headgear.

Unfortunately, when we got there we found that the auction had been cancelled, and we had not planned for this.  After a brief consult we quickly formulated Plan B and headed for the closest flea market.  I'll have more on our search for the necessary materials for my Pinterest project later.

On another note, did you know that February is the start of mating season for skunks?  It's not uncommon to see a skunk out and about where we live, but come February they're everywhere.  This morning I startled one on my way to work, and it scared the spit out of me.  Not because I was afraid it would hurt me but because a skunk/ vehicle encounter would require a trip to the car wash with a bottle of Dawn, in clothes I'm prepared to throw away, knowing that I'll never be able to scrub hard enough to get rid of all of the stink.  The skunk's instinct was to raise it's tail and present me with business end a' la pew,  my instinct was to gun it.  Turns out my lead foot moves faster than Pepe's peee-eww patootie.  Wait till I tell L that speeding really is a useful talent.
Posted by Unknown at 11:37 AM