A Giggle: Gonna Be A Bear

As I mentioned yesterday, M and I are off to an auction this evening in search of great treasures.  Did I happen to mentioned that the first half of the auction is outside?  where it's cold?  That should tell you how dedicated I am to this task because I HATE the cold. The only thing I hate more than the cold is the cold accompanied by wind and/ or rain.

For years now I have tried to convince L that we would should sell out, move somewhere tropical and become pineapple farmers.  He's not buying into it (nor is he selling out).

So since L refuses to be let me be a pineapple farmer, I guess I could be a bear instead.  During the winter I already pack on 10 pounds, eat everything that doesn't outrun me, sleep as much as possible, and tend to be a little grumpy.  Now that I think about it I'm almost there.  Guess who isn't shaving her legs tonight?!?! 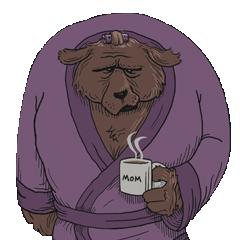