Buying The Breaking Dawn: Part I

It was another Twilight Saga event weekend at my house.  For various different reason our group was a little smaller this time, just me and the Girls, but we still had a fantastic time.  We left the house shortly after 8 pm and headed to town for an evening of fun. 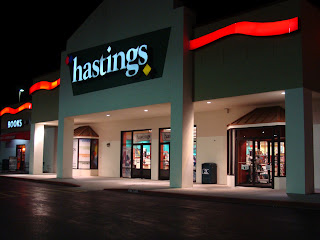 In the past there have actually been games, contests, and drawings to help fill the time, but it seems the glow of the Twilight Saga has dimmed.  To be honest I think even the Girls are in it more for the late night, the early breakfast, and the fact that it's tradition rather than the movie itself.

Since the "party" started at 9 pm and the movie wouldn't actually be sold until 12:01 am we had three hours to fill, so we found various other ways to amuse ourselves.  We've gotten very good at passing the time while waiting for a Twilight Saga event to start.

We shopped for other movies.  I also bought Forrest Gump and Secret of Nihm.  I couldn't believe the Girls had never seen Secret of Nihm.  We watched it Sunday afternoon and in my opinion they did not show the appropriate appreciation for such a classic.  If they're not careful they won't be allowed to share anymore of my childhood classics.

There were bargain bins to dig in, 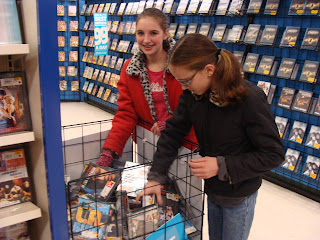 and demo displays to play with. 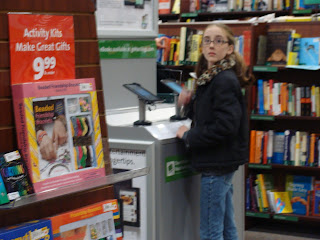 We got ourselves some refreshments, and made ourselves comfortable. 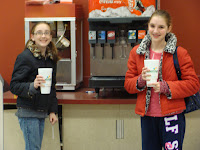 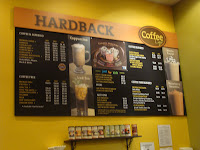 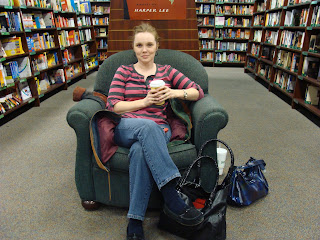 As the night went on I found my iPhone battery in need of rejuvenation.  So we went in search of a plug-in, rearranged the furniture to reach, and made ourselves comfortable again. 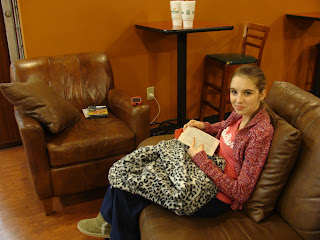 At midnight we got in line for Breaking Dawn. 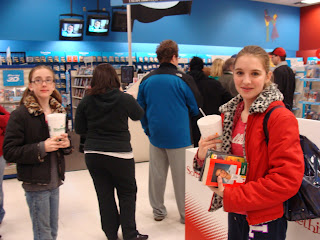 Then it was time for breakfast.  After walking into the restaurant we realized we hadn't taken a picture.  So we immediately turned around, went back out, snapped a picture and returned inside to be seated.  That didn't get us any strange looks at all!
﻿ 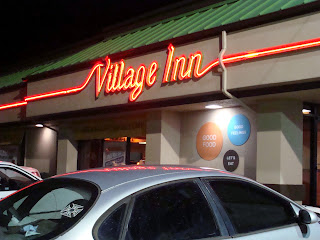 Check out the creamer on the table.  My daughters drink coffee just like I do, white.  I have been know to tip solely on a waiter/ waitress's ability to provide enough cream﻿. 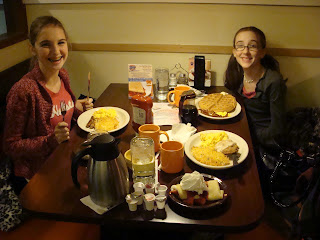 During breakfast GG announced that the Vampire Academy books are being made into movies, and then wanted to know if we could continue our tradition to include this series as well, NG seconded that notion.  There are six books in that series.  On an average of 1 year per book/ movie, and assuming they made all six books into movies, that series wouldn't conclude until sometime around 2018.  I pointed out to GG that she and NG would be in college by this time and would most likely not care about attending the Vampire Academy events with their parents.  They assured me that just wasn't so.  So the agreement we have reached is this:  for as long as they wish to continue to attend, we will be delighted to attend with them, and L and I will treat.  L and I realize the chances of this actually happening are slim (very slim), but should our daughters choose to spend a late night out with us then we will be honored to have their company.

We karaoked all the way home, and we sounded great by the way.  Just ask us! We immediately changed into our bed clothes, gave L the highlights of the evening, and settled down to watch Breaking Dawn before we went to bed. 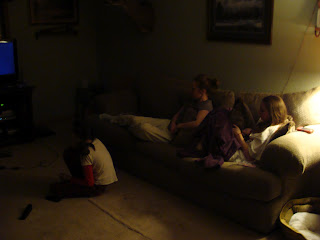 So feeding my kids breakfast at midnight, getting them home at 2 am, in bed at 4 am, allowing them to remain in their pj's as long as they wanted (and for GG and myself that was all day), and feeding them pie for supper may not win me "Responsible Mother of the Year" but I think I've got a good shot at "Mother Congeniality".
Posted by Unknown at 12:49 PM