Over the Christmas break I took GG to take the written portion of the driving test.  I don't know what the laws are anywhere else, but in the state of Arkansas you must have received your driving permit six months prior to your 16th birthday to be legal to drive without an adult on your birthday.  I took GG to take her test 6 months to the day before her 16th birthday.  It's not that we planned it that way, that's just the way it happened.  Unfortunately she failed to pass the test by one question.  So we made plans to go back the next time she had an orthodontist appointment, because you know how I love to multi-task.

Today was that day.  I left work early, drove to the town where they attend school, checked both GG and NG out, and headed right back to the town I had just left.  That's life in a rural community.  The total miles driven from the time I left home this morning until I pulled back into the driveway tonight?  Approximately 145, this is why I multi-task!  It's not just OCD, it's a necessity.

When we got there GG checked in, a state trooper gave her another lesson in "the skip button is your friend", and she began her test.  NG and I took a seat in the waiting room to read while we waited.

It wasn't until the woman standing in the middle of the room began to pace in circles and utter phrases such as, "there he is, I might have know they called someone", "all I wanted was an ID card, I didn't know they'd check for warrants", it's just one warrant but I bet he's still going to arrest me" that I began to realize something was amiss.

That's right folks!!  It turns out that if you march yourself into a state agency under the authority of state troopers and request any kind of service that requires them to run your name through the system while you have an outstanding warrant they will call a city officer to march you back out while sporting a shiny matching pair of metal bracelets.

On the way to our next appointment we had the following conversation:

NG: If she knew they were going to arrest her why didn't she just leave?

Me: Because one of the eight state troopers she would've had to walk past would have stopped her.

NG: They were all police?

NG: Would they have used them?

Me: No, they would have just physically restrained her.  At the very most they might have tased her.

NG: That would've been cool to see!

Goodness!  One would almost think she had her mother's morbid sense of curiosity.  Now back to the story...

GG passed and got her permit!!  We were all really excited, and then two things occurred to me.  First , this means L and I must now begin the process of teaching GG to drive a real vehicle on real roads among what every parent refers to as all the other idiots out there. Secondly, today changes everything.  This is the beginning of an independence that will transition GG into adulthood and I find myself thinking that it won't be long before my little girl is a grown woman.  Then I find myself yelling "stop the arguing" across the house because the Girls are fighting about the elbow bone and what it looks like (??) and I know I still have a little time left. 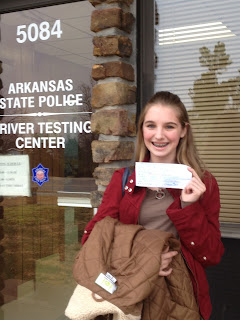