I won't say the vote goes to failure, but there's some definite room for improvement. 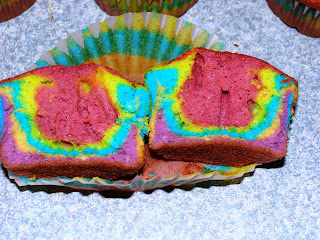 While looking for baby shower ideas I ran across directions for making rainbow cupcakes on Pinterest.  The original blog posting intends for this to be a "fun with your toddler" project.  To be honest I can't imagine making these cupcakes with a toddler, they're quite a bit of work.
L decided it was a good time to go to the shop and do mannish things. 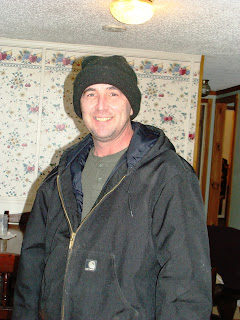 We started with a plain white cake mix and added a large spoonful of sour cream to make them more moist.  We mixed up five colors of batter: purple, orange, blue, green, and pink. 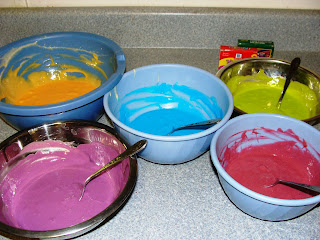 Then we placed a spoonful of each color into the liners, trying to keep them as even as possible. 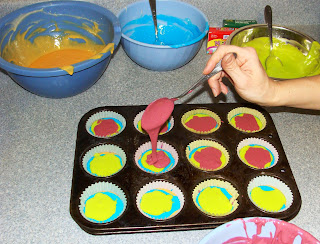 They came out of the oven looking pretty good, and most of them were close to the same size. 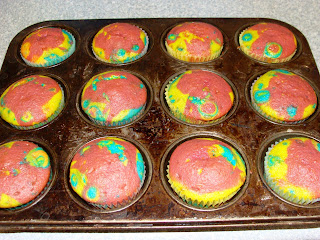 We decided if we were going to have rainbow cupcakes then we might as well have rainbow frosting too.  So I pulled out the Wilson coloring gel and we made five colors of frosting. 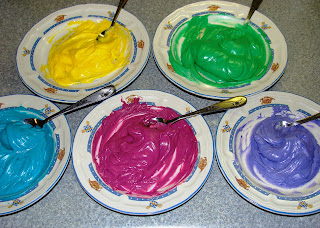 They didn't turn out quite as pretty as I had hoped, but they taste just fine.  Now what are we going to do with two dozen cupcakes?  Well you know me, I'm going to let the Girls eat cake for breakfast. 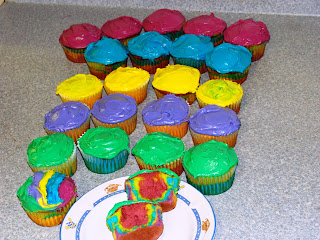