Don't Worry, I Can Fix This 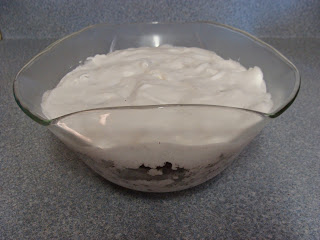 Last night we had friends over for New Year's Eve, and at the last minute I decided to bake a batch of brownies.  The moment our friends arrived I started talking and promptly forgot all about the brownies still in the oven.  I'm sure that doesn't come as any shock to anyone that I was too busy running my mouth to pay attention to what I was doing.  Fortunately L remembered them before they had been baked into an 8x8 chocolate bricket.

Since they spent about 8 minutes too long in the oven they were kind of dry.  I figured they wouldn't be eaten like that so I decided to fix them.  I grabbed a box of cookies and creme pudding at the grocery store and set a tub of cool whip out to thaw.

I crumbled the brownies into bite size pieces.  I then prepared the pudding according the directions on the box and added 2/3 of the cool whip to the pudding.  I layered the brownie pieces and pudding mixture in a bowl to make three layers.  I topped the layers with the remaining cool whip and set it in the fridge to chill four hours.

And then we ate it for supper.  After all today's a holiday, right? 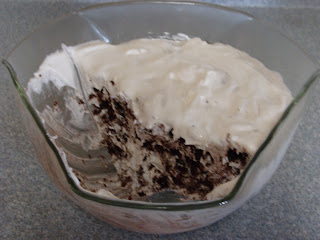