Veterans Of A Different Kind

Last Friday was Veteran's Day.  Let me start by offering a most sincere and heartfelt thank you to all of the men and women who have ever served our country.  The service of an American soldier requires great sacrifice of themselves and their families, and for that they deserve our unfailing support and appreciation.  I'm a firm believer that if you don't stand behind our soldiers in support of them, then you can stand in front of them while you protest!! 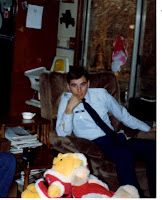 Here's a very young L looking all handsome in his uniform.  In addition to those compass reading skills I mentioned in an earlier post, you can read about that here,  the Air Force also trained L as an aircraft mechanic.  That training has served him well over the years.  He very rarely encounters anything with an engine that he can't fix.

November 11th also happens to be my grandparents anniversary.  This year they celebrated their 61st year of marriage.  No that isn't a typo, they were married on November 11, 1950, my grandfather was 22 and my grandmother 18.  Because of their commitment to the vows they took "for better or for worse" "until death we do part" and due to the blessing of great health for most of those years and still relatively good health for the last few years, together they still remain. 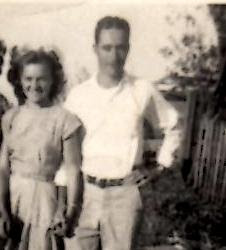 Note: There was a party for their 25th anniversary.  But since I missed it, by two years, I can't write about it.  And yes I know I just dated myself, but I'm still going to make you do the math. 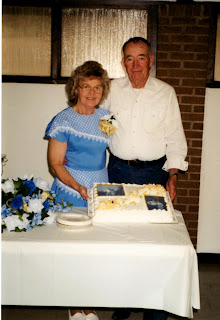 For their 50th Anniversary we partied.  My mother and aunts recreated the dress my grandmother was married in and then made two mini versions of the dress for GG and NG to wear.  They then made each of themselves and me a same but different dress.  (I'd like to say I helped, but remember those skills I've mentioned never having inherited learned? Well sewing is another one of those skills.)  We dressed up the men, ordered cake (no ice cream but we did have mints, nuts, and punch), invited basically everyone my grandparents had any contact with in the past 50 years, and celebrated. 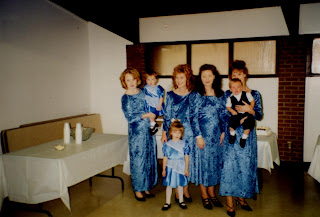 ﻿
Eleven years later my grandparents don't party like they used too, so my mother and aunts decided we would just gather at their house with supper.  My mother would bring chicken from KFC (one of my grandparents favorite treats), my aunts would do all of the side dishes, and I was assigned cake and drinks.  Obviously once I was assigned cake the ice cream was implied, who eats cake without ice cream?!?!

I went by Rick's Bakery for the cake.  When I dictated what the cake should say the woman repeated it back to be certain she had heard correctly, after all it's hard to correct typo's when they're written in cake icing.  "Yep, that's right!  Happy 61st Anniversary.  That's with a 6 and a 1."
We all showed up with our assigned dish to have supper and help them celebrate.  When I arrived I found that my uncle B, unaware that I had been assigned the task, had also picked up a cake and ice cream.  That's alright!  My uncle B is aware of the fact that it isn't a party without cake and it isn't cake without ice cream.  We think alike that way sometimes. 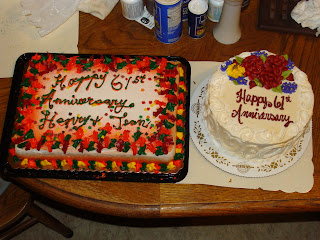 So what can a couple accomplish in 61 years together you might ask?  Well here's their legacy.  They have 3 daughters, 2 sons-in-law, 2 granddaughters, 4 grandsons, 2 great granddaughters, 2 great grandsons, 1 grandson- in law, and 1 granddaughter-in-law.  Over the last 61 years they have raised children, chickens, cows, goats, sheep, pigs, rabbits, ducks, and crops (to name a few).  They have built barns, houses, chicken houses,  and fence (to name a few).  They have cut and baled hay, cut and hauled wood, and swathed and combined (to name a few).  Regardless of what the job was if it needed done they did it.  They might not have always been working side by side, but they were always working together and in unison toward the same goals.  That is the accomplishment of a lifetime, together.
God has blessed them to still have each other, and He has blessed all of us to still have them both.  God willing we'll do it again next year: same time, same place.  I'll bring the cake (and the ice cream)! 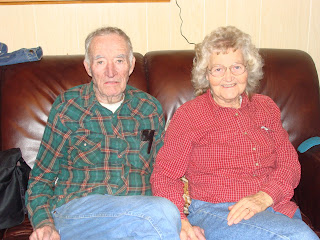