Greeting The Breaking Dawn: Part I

Last Thursday when the alarm went off at 5:09 a.m. everyone at my house knew it would be almost 24 hours before we would be in our beds again.  As I mentioned before our family is a bunch of twi-hards, and Twilight Saga events have become a full family affair, you can read about that here.

The night before we did all the necessary planning, because you know how I love a plan!  Our group consisted of seven people.  L, myself, GG, NG, L's niece J, J's friend A.D., and my cousin's wife K, and the plan went like this....

L and I would come home after work, pick up the girls, and drive right back to town.  I had a prior obligation for that evening and wasn't going to be free until after 8 pm.  So J agreed to pick up the Girls and take them to the theatre with her.  They would meet up with A.D. and get in line.  L would stay with me and we would meet up with them as soon as I was finished.  K planned on joining us all at the theatre a little later. 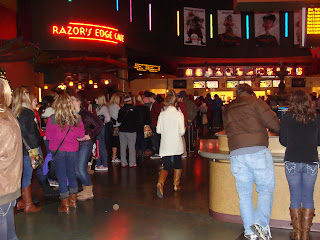 Shortly after 8 pm L and I were on our way, about 5 minutes before we got there GG called to tell us they had already been seated and to come straight into the theatre.  So when we arrived L and I went right to the front and declared ourselves to be "Theatre 1", the gentleman ripped our tickets in half and directed us in.  K joined us about 20 minutes later.  Now with our group complete there was nothing to do but amuse ourselves for the next 3 1/2 hours.

I bet you're wondering what someone might do to pass several hours in a rapidly filling movie theatre while waiting on the much anticipated midnight movie.  Well here are some of the events that passed the time: 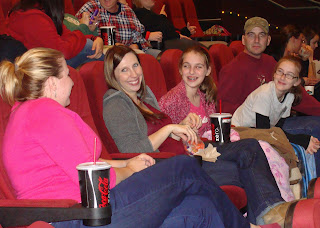 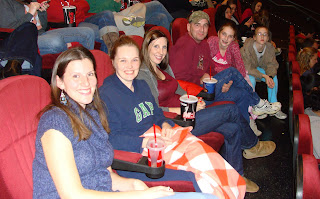 Finally it was time!!  The lights began to dim, the theatre as a whole was warned to keep all cell phones/ filming devices put away or risk being removed, and the movie screen lit up.  Just as the Dolby surround sound began it's warm up K let out a war whoop that would have made Chief Sitting Bull proud, and was met with the applause of the theatre!
The movie was great!  I won't give any details, but if you're planning to see it stay through the credits.  There's a small scene at the very end you won't want to miss.
When the movie was over K went home, but the rest of us headed across town to IHOP for a really early breakfast.  Have you ever noticed that there's always one loud rowdy group that really should start winding down but is still drinking caffeine drinks and pumping their systems full of unneeded sugar?!?!  Yep, that was us!!  We were that crazy, over hyper, loud "hope they tip good and leave soon" group of yahoos.  We had a blast!! 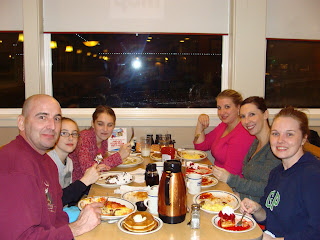 At 4:30 am we arrived back home and immediately went to bed.  After grabbing a few hours sleep L went hunting, but the Girls and I lounged around the house all day in our pajamas discussing our night, speculating about the next movie, and planning our next Twilight Saga event.  You'd think we were fans or something!
Posted by Unknown at 10:10 AM