We Go Which Way?

A few weeks ago the Girls and I picked up a geocoin from a cache we grabbed in our local state park.  You can read that here.  Geocoins are registered through the geocaching website so that they can be tracked as they are moved.  Our geocoin originated from Arizona and had most recently been brought from Dardanelle State Park.  We immediately began looking for it a new home.
With hunting season only a week away L decided to make a trip up to his parents after church to refill his deer feeder and check the images on his game camera.  At the last minute the Girls and I decided to tag along so we could visit for a while, and on the way home we planned to stop at another state park and drop the geocoin.  It started as a good plan.
Now here's the trouble with spontaneity.  I never seem to have enough time to plan for it properly.  I threw everything  I thought we would need for one quick cache grab in a fanny pack.  Yes, that's right, I said fanny pack.  Don't judge!  It's small, convenient, and it isn't like we plan to use that little jewel for anything else.  Inventory included 3 granola bars, a pack of peanut butter crackers, an ink pen, the geocoin, and lip gloss.  L would be playing the role of "directions on how to read a compass", because apparently they teach you skills like that in the Air Force.  (once again we forgot tick repellent)
After church we drove up to L's parents' house where he filled his feeder, retrieved the memory card, and took time to ooh and aah over the wildlife.  On a side note it turns out watching a buck and a raccoon fight over a piece of corn is entertaining even in still shots.  We all got a chance to visit, catch up on the going on's of the family, and in general had a good time.

Originally we had planned to drop the geocoin in the official "Arkansas State Park" cache.  However, we decided we might have time to grab a "private" cache along the way.  When we parked the truck the app showed us as being .5 miles from this particular cache, and thus began the search.

Now there are several things that made this current search different from the previous ones.  A few of those differences were;
L originally took the lead because he could read a compass.  I eventually wrestled the lead (and my iPhone) back from him when he kept taking us cross country rather than sticking to the hiking trail.  The words "poison ivy, snakes, and ticks. Oh My!" kept playing in my head and I just couldn't handle the rugged approach.  Eventually we reached the point where it became necessary to leave the trail and actually begin searching for the cache.

L found it in a matter of moments. 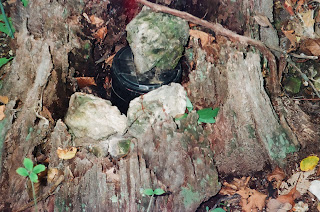 Doesn't he make a good Vanna? 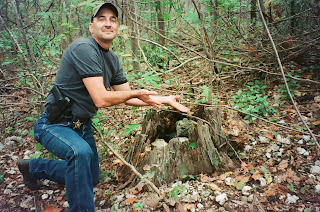 We logged our find, dropped the geocoin in, and chose our prize. 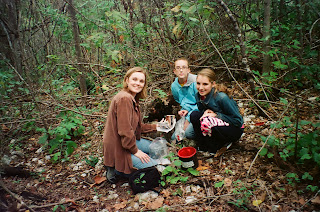 This cache didn't have many items to choose from but the moment the Girls saw the $1 bill there was no need to look further.  As far as they were concerned they were now legitimate geocachers and had officially turned a profit. 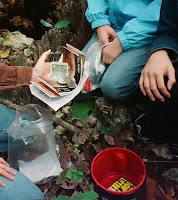 As I mentioned before we were unfamiliar with this park and therefore did not know this hiking trail.  We decided we would continue forward and finish the hiking trail, until we saw the lake.  We then decided to google it and see just how long the trail actually was.  So in the middle of the Hidden Diversity Multi-Use Trail we stopped to do a google search (isn't technology great?) and found out the length was 24 miles, and the loop we were currently on was 5 miles.  So we turned around and started backtracking, since we were pretty certain (insert hopeful) that would be the shorter end of the loop.  Now going cross country to find a cache is easy, and we had actually cut out large sections of the trail by doing this before L was ousted as leader and I assumed power.  It's not as easy to do when trying to get back to the truck since there is no green balloon to move toward.  This meant we would have to stick to the trail.  At this point L reclaimed the position as leader since I was responsible for landing us somewhere in the middle of a 24 mile long hiking trail.

By the time we reached the truck we were all hungry (those granola bars were long gone), tired, and ready to be home.  On our way home we passed someone very distressed drunk and walking in the road. L stopped to assist, and eventually arrest, her.  While snacking on the remaining peanut butter crackers and waiting on transport to arrive the Girls and I had the following conversation:

GG: Can we just walk to the gas station and get snacks?

Me: Because it would be rude to just leave.  It's unsouthern.
GG: Oh, well I think Daddy's already done rude.
Oh yea, that.
Posted by Unknown at 11:28 AM