Is It Starve A Cold, Feed A Fever? Or Feed A Cold.....Nevermind, Just Feed Them Both: Cheesy Potato Soup

Shortly after L and I got married he caught an awful cold.  I decided this called for potato soup, which in my mind is a cure for what ails ya'.  In my house regardless of what autumn/ winter ailment you're suffering from the treatment is potato soup.

After a lengthy discussion about how to make potato soup I agreed to call his mother and compare recipes.  Yep, just as I suspected her recipe starts by boiling potatoes in water. We had previously had a lengthy discussion about how to make sweet tea, and after calling his cousin to compare recipes, it turns out she also starts by placing tea bags in boiling water.  Lucky for him I was already a master at boiling water, and sixteen years later he no longer questions my mad scientist cooking skills.

So last night I felt we were all in need of a little cure and comfort.  L had been suffering from a cold most of the week, GG and NG had been struggling with allergies, and I was tired and had the temperament of a nap deprived toddler.  Plus the weather had just turned colder making it the perfect temperature outside for eating soup inside. 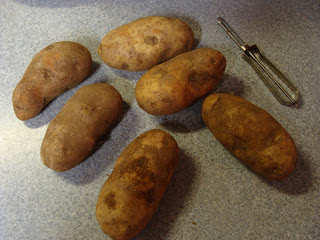 Notice the potato peeler﻿?  I can't function without it!  I grew up watching my grandmother, my mother, my aunts, and basically every other woman in my family produce perfectly peeled potatoes using a simple paring knife.  I never did inherit learn this particular skill.  You give me a large baking potato and a paring knife, I'll give you back a bite size potato nugget and the weapon used to commit the crime.
After peeling and cubing my potatoes, I place them on the stove top in a large pot of hot water and throw in my seasonings: salt, pepper, parsley, garlic powder, minced onion, minced garlic, and a little bacon grease (if I have it).  Put a lid on it and let it cook until the potatoes are tender.  The second best thing about potato soup is how it makes the house smell.  Yummy!! 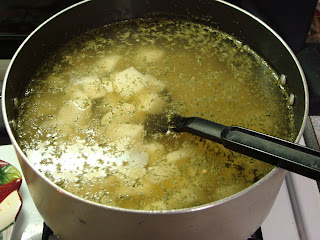 After the potatoes have cooked I thicken the broth with a flour/ milk mixture and add the meat.  I also add more water if the soup seems to thickening up too much or too fast.  Most of the time I use cubed ham but when I have the time I will fry and crumble bacon.  A few years ago I decided to try adding cheese and found that we really liked the extra flavor, it's best to add the cheese at the very end and continue stirring just until it's melted.  I use Velveeta most of the time but have on occasion used shredded sharp Cheddar. Add some crusty garlic bread to the table and it's done. 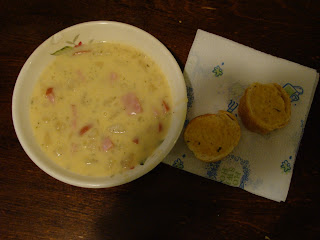 Place potatoes in a large pot and add enough water to fill the pot 3/4 full.  Add bacon grease, black pepper, salt, parsley flakes, garlic powder, minced onion, and minced garlic to water and place over medium heat.  Bring to a boil and cook until potatoes are tender.  Whisk flour and milk together until smooth, add to potato broth slowly while stirring constantly to prevent lumps.  Add in meat and continue cooking over medium/ low heat for an additional 15 minutes.  Add cheese and continue stirring until cheese has melted.